THREATENED, Hill Country Lawmen 2
Do blondes really have more fun? Not when danger lurks around every corner.
Texas Ranger Ben Rasmussen had his heart broken by a beautiful blonde once, and no way is he interested in repeating the experience. Still, there’s something tough, yet fragile, about a certain young business owner, and yes, dammit, she’s a blonde. And beautiful to boot.

Co-owner of Wheaton’s Mercantile and Bistro, Beth Wheaton has had a thing for Ben Rasmussen since the seventh grade when he protected her from some bullies. She isn’t just any blonde. And she’s nothing like the bimbo who trashed Ben’s marriage. But she is determined to break through his reserve to find

But when the Houston mob and a deadly drug cartel threaten business owners in the Texas Hill Country, Beth's business is bound to be one of their targets. Ben finds himself drawn more and more to the beautiful blonde who's willing to do anything to save her home town. Even if it means risking her life.

HUNTED, Hill Country Lawmen 1
Two bodies and counting...  A hit man on the prowl...
Los Marcos County Sheriff Vincent Tate stands for law and order. Always has. Absolutely nothing deters him from this mission. Not even his cheating wife who ran away with one of the bank VPs. More and more, Vince is drawn to his old love, sexy-as-sin pharmacist Abby Fields who’s come back to Kenton Valley to run her late father’s drug store. But he’s not free.

Inevitably, they are pulled together the same day an intruder breaks into Abby’s home and two bodies are discovered on Vince’s ranch, complicating and threatening everything. With their lives and his job on the line, he’ll do whatever it takes to find the killer and win Abby’s heart for once and for all.

OUTLAWED, Hill Country Lawmen 3
Breaking the law for a just cause.
Ex-Navy SEAL, Josh Tyler returns from Afghanistan and discovers his father has a gambling problem and has lost the ranch that's been in the Tyler family since the late 1800s due to unpaid taxes. Even worse, his father blames Josh for enlisting after 9/11 and leaving him alone to manage the ranch. It's true that 9/11 changed Josh's worldview. He enlisted and never looked back. Still, he’s never forgotten his high school love, Luci. Seeing the woman she is now rocks his world. But he won't let an old flame deter him from righting more than a few wrongs, even if he has to break the law to do it.

Despite her dark, slim beauty, Lucinda Hendrix is a rancher through and through. The San Saba Guest Ranch caters to city dudes who want to try their luck as cowhands  and city gals who just want to while away their time in a luxury retreat. But Luci's tough, and not even her father's ill health will keep her from standing up to the sheriff who would like nothing better than to get his hands on her very profitable ranch located on the Los Marcos County line. She hears rumors that her former neighbor and high school heartthrob Josh Tyler is back in the county, but she's yet to run into him. Will he still ignite the same passions he did then? Passion aside, she hears even more disturbing rumors. Is it possible her old beau is venturing onto the wrong side of the law?

Passions may be long denied, but the attraction is instantaneous. While their fiery passion threatens to engulf them, they vow to fight the local corrupted officials...if the sheriff doesn't arrest them first.

SEDUCING THE SHERIFF
Half-dressed and going for naked…
Starlight Tyler needs to get rid of something inconvenient—like her virginity—pronto. With her mother, a Pinkerton agent, and a wealthy suitor she can’t stand on her trail, there’s only one solution to stop them in their tracks—Cordero Tate, the love she left behind. She never expected his past to stall her headlong rush into his arms.

Sheriff Cordero Tate is a haunted man on a mission. Come hell or high water, he’ll round up every member of the gang responsible for the deaths of his wife and unborn child. He’ll make damn sure he never puts his heart on the line again. As in never impregnating another woman. One look at Star, though, and all the old feelings of love and lust come back in a rush. Worse, she’s just as determined to lasso him into her web of passion as he is to keep her chaste.

Their exploration of ways around that impasse leads to nights of unbearable sensual pleasure.
Until her past catches up with her…

Lust at first sight...
Over her not-so-dearly-departed husband’s grave, Natalia Montrose vows to bed the first suitable man she meets.

Enter one Jared Fields who offers to assist in managing her newfound wealth. No thank you! Indeed, this passionate woman would rather keep control of her wealth while enjoying the virile stranger until she’s sated all of her desires.

Disowned by his New York City family, Pinkerton agent Jared Fields enjoys the freedom afforded by the various assignments he receives. But discovering whether or not the Widow Montrose had her husband killed may prove a little too difficult. When he meets the fiery widow, all he can think about is taking her to bed.

Natalia and Jared circle each other warily. Both feel the pull of sensual heat, but when the Blizzard of 1889 hits, will the sexual sparks be enough to keep them warm...or alive?

MASTERING THE MARSHAL
Wanted: Dead or alive. (Alive preferred, just sayin’.)
When US Marshal Sam Dunaway comes to Kenton Valley, Texas, to prepare for a murder trial, the last person he expects to run into is his late wife Celine. The same woman who ran off with his life savings and supposedly died in a boardinghouse fire.

Plain Jane seamstress Selma Nelson is surely a dead ringer for Celine. Rest assured, the demure dressmaker has a secret or three. Is there a chance Sam will understand if and when she comes clean with the truth? More likely, he’ll likely lock her away and toss the key.

What a dilemma. Either Sam sets aside his principles and arrests her or he loses the love of his life. One thing for certain, he can’t deny the resurgence of passion that’s fanning the smoldering embers of their former love into a roaring inferno. 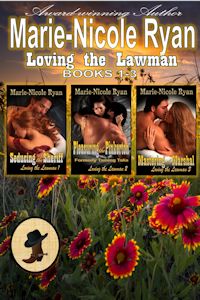 Marie-Nicole Ryan
I've had a life-long love affair with books. Why on earth did it take so long for me to write my first one?